Event-Driven Architecture (EDA) is a good complement to Domain-Driven Design. We think EDA is an important ingredient for building scalable systems. It is also an enabler for designing loosely coupled modules and bounded contexts (business components).

In the simplest form you might need Observer pattern to decouple modules, swap direction of dependencies. When something happens in the core domain a notification should occur in supporting module (e.g. statistics). It is desired that core is independent of support modules. For this Sculptor provides DomainEvent and a mechanism to publish and subscribe through a simple event bus.

You will often benefit from communicating between bounded contexts (business components) in a loosely coupled way, e.g. send and receive messages with JMS. For this Sculptor provides implementations of the event bus that integrates with Apache Camel and Spring Integration. Same API as the simple event bus. It is also possible to mix Sculptor event bus with usage of ordinary endpoints provided by Camel or Spring Integration.

The simple event bus use plain synchronuos invocations to notify subscribers. If you need asynchronous notifications that is easy to achieve with Camel or Spring Integration.

The event bus API is extremly simple and you can easily plug-in your own implementation of the bus. It should be easy to integrate with Akka, Redis, GAE Task Queues, or additional integration products.

In addition to publish/subscribe Sculptor also has support for CQRS and EventSourcing.

In this tutorial we have used Martin Fowler’s shipping system example.

Sculptor design model (model.btdesign) of the core domain objects and services is defined like this: 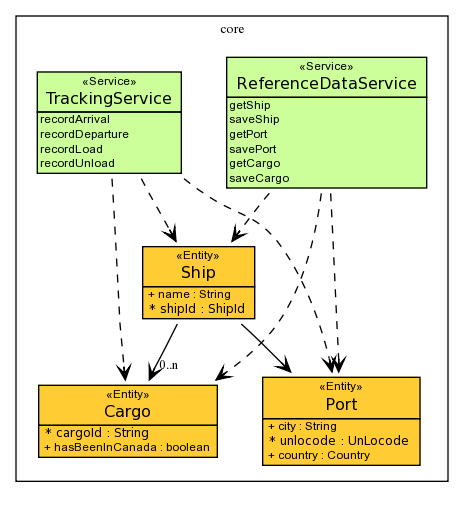 Try with your own project

We encourage you to create your own sample project and try the different pieces hands-on as they are described in this tutorial. You create a new project with the archetype as described in Part 1 of Hello World Tutorial.

Thereafter you can copy the sample shipping domain model as defined in previous section and paste in model.btdesign.

Over the last few years it has become clear that it is very useful to add a new pattern to the DDD “Building Blocks” (Entities, Value Objects, Services, etc.) – Domain Events. This pattern has been around for a long time. Martin Fowler wrote a good description .

DomainEvents are defined in Sculptor design model (model.btdesign) like this:

DomainEvents may contain attributes and references in the same way as ValueObjects and Entities.

DomainEvents are always immutable and not persistent.

Events are about something happening at a point in time, so it’s natural for events to contain time information. Sculptor automatically adds two timestamps, occurred and recorded. The time the event occurred in the world and the time the event was noticed.

The easiest way to publish a DomainEvent is to mark a service or repository operation in model.btdesign like this:

As an alternative the DomainEvent instance can be created from the return value or parameters. The DomainEvent must have a matching constructor. In the below sample code the save operation of CargoRepository returns a Cargo. The save method is defined with a publish side effect that will create an instance of CargoSavedEvent holding the saved Cargo entity.

The result of the above declarative way of publishing events is a generated annotation @Publish on the method. It will trigger the Spring AOP advice PublishAdvice that is part of Sculptor framework.

It is of course also possible to publish events programatically:

Subscribers can be defined in model.btdesign. Any ordinary Service or Repository can become a subscriber of a topic like this:

You need to manually implement the receive method of the EventSubscriber interface.

Instead of writing ugly if-instanceof conditions you can add one method per event type and use the DynamicMethodDispatcher.

Not only Service and Repository can be subscribers. It is also possible to define a dedicated Consumer, which can only receive events. You can inject Services and Repositories to the Consumer, as usual.

It is of course also possible to subscribe with-hand written code:

The default event bus is a good start, but it is likely that you need to replace it with another implementation if you do real Event Driven Architecture. Sculptor provides two more implementations out of the box. One for Spring Integration and another for Apache Camel.

How to Use Spring Integration

Define the following property in sculptor-generator.properties:

Add the following dependency in pom.xml

Add in properties section of pom.xml

There is also a spring-integration-test.xml in src/test/resources to make it possible to use different configuration when running JUnit tests.

A little sample of how to add a few topics and routes:

How to use Apache Camel

Define the following property in sculptor-generator.properties:

Add the following dependencies in pom.xml

Add in properties section of pom.xml

Then you will have a new camel.xml file in src/main/resources. This file is only generated once, and you can use it to add configuration for Camel. Documentation is available at Apache Camel site.

There is also a camel-test.xml in src/test/resources to make it possible to use different configuration when running JUnit tests.

How to use your own event bus

The interface of the event bus is simply three methods, subscribe, unsubscribe, and publish. You can easily write your own implementation. You can get inspiration by looking at the source code of SimpleEventBusImpl, SpringIntegrationEventBusImpl or CamelEventBusImpl.

Thereafter you need to define that your bus is to be used. Define that in src/main/resources/more.xml like this:

That will override the default event bus named “eventBus” (also defined as a Spring bean with the same alias name in src/generated/resources/pub-sub.xml).

… and dozens of more questions are of interest for different stakeholders.

It would be rather easy to develop support for those kind of queries in the master shipping domain, but problems will soon bubble up.

Command-Query Responsibility Segregation (CQRS) comes to the rescue. Simplified it is about separating commands (that change the data) from the queries (that read the data). Separate subsystems take care of answering queries (reporting) and the domain for processing and storing updates can stay focused. The result of the commands are published to query subsystems, each optimized for its purpose.

There are a lot of interesting material to study related to CQRS. For example:

Let us look at a sample of a query subsystem that is responsible for answering “Where is my cargo now?” (and similar queries).

It should be defined in a separate subsystem with its own database. It might be defined like this in model.btdesign:

Note that the CargoInfoRepository subscribes to the shippingChannel. When the master shipping subsystem has processed the commands it publishes DomainEvents to this topic. It can be JMS messages (maybe serialized with Protobuf), but that is technical details handled in the integration product and hidden from the business domain.

The actual public query, locateCargo in the CargoTracker service, is a plain findByKey without any joins, i.e. super fast.

Does it strike you that a relational database might not be necessary, nor optimal, for all types of query stores? I think you should select the best tool for the job. Key-value store, document-oriented database and RDBMS with SQL all have their strengths and weaknesses for different scenarios.

Sculptor has support for mongoDB.

As you can see the same publish/subscribe mechanisms as described before can be used for an architecture based on CQRS. A sample application (betting system) using Sculptor for implementing CQRS is described in a blog post.

CommandEvents are always immutable and not persistent.

There is a separate command event bus instance for processing CommandEvents. When subscribing to the command bus it must be specified:

Like the event bus is the command bus defined as a Spring bean with the alias name commandBus in src/generated/resources/pub-sub.xml).

A domain model typically holds current state of the world. Event Sourcing makes it possible to see how we got to this state and query how the state looked liked in the past. Essentially it means that we have to capture all changes to an application state as a sequence of events. These events can be used to reconstruct current and past states.

Good descriptions of Event Sourcing can be found here:

CQRS and Event Sourcing are two different patterns. One can be used without the other, but they also play very well together.

DomainEvents and CommandEvents are by default not persistent, but it is easy to make them persistent so that they can be stored and loaded in the same way as Entities and ValueObjects, i.e. with Repository:

Using the ordinary building blocks of Sculptor it is rather straightforward to implement Event Sourcing. It is described in this blog post how to do it. You might need to add snapshot mechanism also.

MongoDB is a good data store for events, as explained in the blog. The MongoDB Tutorial explains how to setup a project with MongoDB persistence. If you don’t use MongoDB then you can use any other supported database (JPA), since it is using the ordinary persistence mechanisms of Sculptor.

You can have one subsystem responsible for the Event Sourcing only and use MongoDB for that, and have another subsystem storing current state of the domain model using RDBMS, and another for queries.

The complete source code for this tutorial is available in GitHub: https://github.com/sculptor/sculptor/tree/master/sculptor-examples/mongodb-samples/sculptor-shipping

The source code of the examples described in the EDA-related blog posts are available in GitHub as well: https://github.com/sculptor/sculptor/tree/master/sculptor-examples/eda-samples/